The globalization train is leaving the station buddy!

“Globalisation marches on without Trump” is a long article (“The Big Read”) by Shawn Donnan in the Financial Times of November 6, 2017.   The nub is that other countries are “striking trade deals” and “launching negotiations at an accelerating pace”, while Donald Trump’s America is not. As a result, the United States is “already being written out of the script,” while “the rest of the world is moving on”.

It reminds me a little of when my stock broker would try to talk me into some risky momentum play, with the line “The train’s leaving the station buddy! Are you on or not?” Not that he had a convincing answer why this was such a good investment at a fundamental level, if you managed to cut through the sales patter and ask. Indeed, you distinctly felt he thought you a bumpkin for asking.

The FT also apparently sees little need to spell out why regional trade deals like the proposed Trans Pacific Partnership (TPP) are such a good thing, or to mention the risks and costs that common sense suggests must be attached to such a venture, in addition to its benefits, or the possible dangers to social groups other than big business. Perhaps it thinks the case has already been made and does not bear repeating.

Nevertheless, globalization is complicated. Take NAFTA.  A recent study estimates that, while trade between the members certainly boomed, the impact on their overall welfare ranged from small (Mexico: +1.3%), to utterly negligible (USA: +0.08%), to negative (Canada: -0.06%).  Not that the impact on all groups was small.  Another study of the NAFTA impact on US labor markets finds it “dramatically lowering wage growth for US blue collar workers in the most affected industries and localities (even for service-sector workers in affected localities, whose jobs do not compete with imports).”  If you cared particularly for blue collar workers, you could rationally conclude this trade deal was not worthwhile for the US.

NAFTA was supposed to benefit Mexico most, propelling it onto faster growth and convergence towards US and Canadian incomes. That has not happened.  Mexican real per capita GDP growth averaged a low 1.1% a year in the years since NAFTA, down from 1.8% in the equivalent period before it.  Astonishingly, Mexico’s per capita GDP relative to the US (in PPP terms) has fallen since NAFTA came into effect in 1994. (Figure). This would be true even if you factor out the Mexican financial crisis of 1995. True, NAFTA was not necessarily responsible for these trends. But it also doesn’t seem to have been of much help in tackling the deeper economic, social and political problems facing the country. 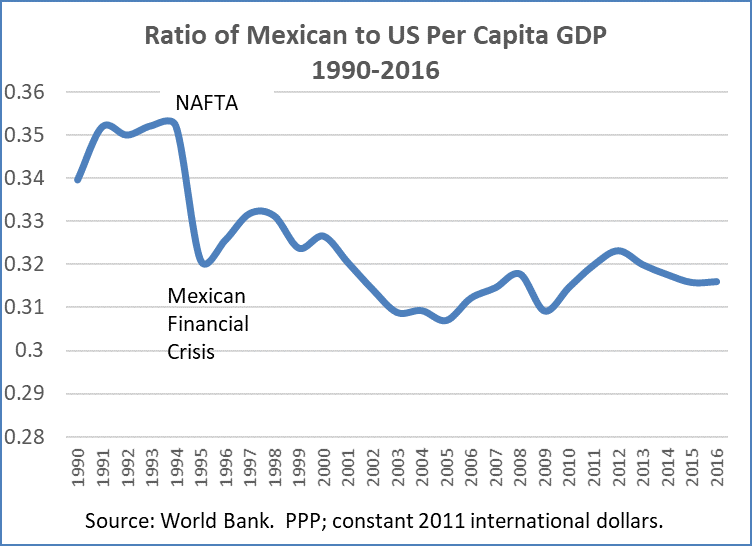 So, is Donald Trump really so misguided to downplay regional trade deals like TPP, which might not matter much to overall US economic welfare, but which might yet hurt sections of the working class and poor? It’s not obvious that he is, at least on this point. Now that he’s President, should he set aside democratic accountability and the views of his voters, who are sturdily against more  trade deals, as the FT appears to think he should?  We shouldn’t be surprised that a determined elite push for “hyperglobalization” could undermine democracy at the level of the nation state: it is one of the outcomes predicted by Dani Rodrik’s famous “globalization trilemma”.